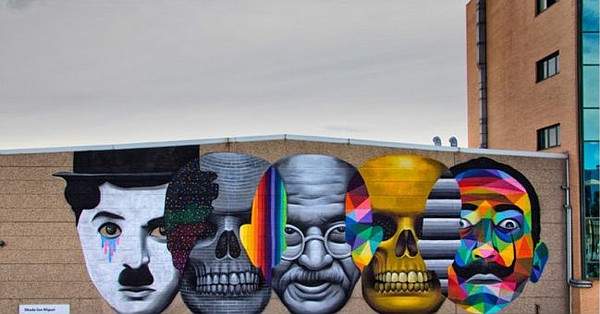 Mural by street artist Okuda, who was portrayed in book In Heroes We Trust: Street Artists and Their Heroes. Image via Palibex.com

There’s heroism even in the most grittiest corners.

It’s a theme that boutique owner and fashion designer Neely Shearer puts forth in her new book “In Heroes We Trust: Street Artists and Their Heroes.”

The book showed work of street artists from around the world, such as Okuda, Robbie Conal and Chase. The tome also quoted artists' views on heroism and people they found heroic.

A party for the book was produced Nov. 10 at Shearer's boutique In Heroes We Trust, just off of the stylish Abbot Kinney retail district in Venice, Calif. The event was produced by publisher Knock Knock.

Here’s an excerpt from Shearer’s introduction to the book. “I’ve always been inspired by underdogs – visionaries who follow their hearts and dreams at all costs. That’s why I’ve spent most of my life working with designers and artists who break rules, create beauty and open windows on new ways of seeing life. Street artists, in particular, unite people across borders, languages and ideologies often at great personal risk.”

Cover of book In Heroes We Trust: Street Artists and Their Heroes